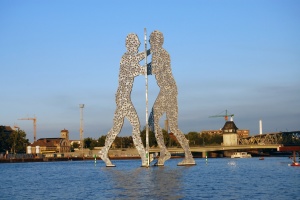 News from Berlin. Zukunft’ is a cultural centre in Friedrichshain  near Ostkreuz station which opened three years ago on a site that has been important for decades. During the time when the area was on the Eastern part of the Iron Curtain, this place was used to stock the movies of Progress Film Verlag, the exclusive distributor of films made by Deutsche Film AG studios, or DEFA. These studios were founded shortly after the Second World War with the goal of re-educating the public using films. This soon turned DEFA into an agency to spread Soviet world views.

The buildings were abandoned after the fall of the wall in 1989. In 2003, the Ministerium für Entspannung, an organisation promoting and organising GOA parties took residence here, until the roof collapsed six years later. In 2011, the Haus Zukunft decided to invest in this location, and to dedicate it to a variety of cultural events including independent film showings, expositions of contemporary art and underground concerts. The location also houses a bar, two beer gardens and an open air cinema. Because of its location and its past, Zukunft is not without its charm despite the fact that it is still under construction and a mixture of concrete and dirt.