What are those colourful tubes for? Is it an art installation? Are they used for transporting natural gas? These are some of the typical questions asked by those who visit Berlin. Colourful external tubes, running throughout the entire city, are one of the first things to be noticed. They immerse themselves into the landscape of the city, not only in modern Prenzlauer Berg or Kreuzberg, but also meandering through the historical sights in Mitte. I myself was also deceived, thinking it to be just another piece of modern art. But here we present you with the explanation of the meaning of 60 km of coloured Berlin’s pipes.

Wansee, Mügelersee, Tegelersee – Berlin is surrounded by several lakes, and is home to the river Spree. Not to get into too much detail, it simply means that the ground Berlin is built on is quite marshy. Searching deeper, it has been argued that the word ‘Berlin’ actually comes from a word in the Proto-slavic language, literally meaning ‘swamp’. With groundwater in Berlin existing just two meters under the city’s surface, consequently, it is impossible to dig any tunnels without the risk of flooding the German capital. And could you imagine the city without the metro system? Thus, the pipes surrounding Berlin serve to pump water from the ground and transport it to the canals, allowing both together to drain the basements of the city and to facilitate the urban works. For more than a century already, a company named ‘Pollems’ has been responsible for the system.

And what about tube’s colours then? Bernd Kempf, managing director at Pollems, told BBC that years ago they asked a psychologist which colours they should choose to paint the pipes. She suggested pink and purple, mostly because they are the colours prefered by children.

And to also solve the tube’s last riddle, why do they have all these twists and turns? The answer is down to earth as well. When temperatures fall under 15 degrees, the material can shrink or break. Avoiding long linear parts prevent the pipes from doing just that.

The idea of the twisting pink iron tubes is one of the landmarks of Berlin and the idea is being copied by other cities in Europe, e.g Warsaw. 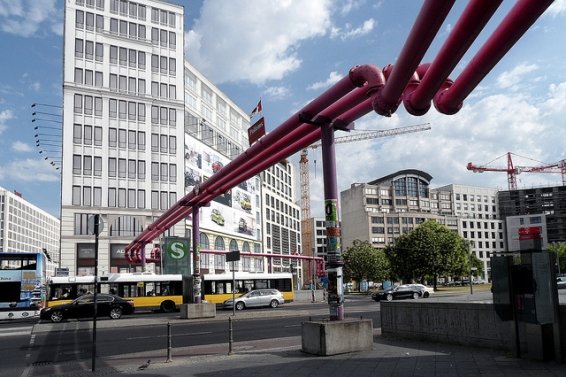 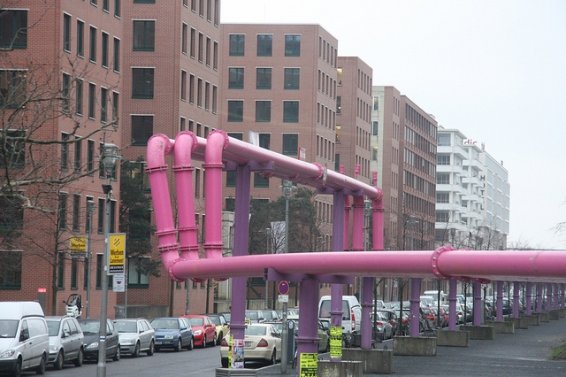