A video featuring the teams of H. E. Amb. Philippe Etienne from France and of German Foreign Affairs Minister, Frank-Walter Steinmeier, passing a football between themselves while in their respective national team colours has gone viral. The video was launched to celebrate the semi-final of the European Championship and, regardless of the result of the match, exhibits once more the excellent bilateral relations between France and Germany.

The idea couldn’t be any simpler. The German Foreign Affairs Minister, Steinmeier, starts the video, kicking a ball while wearing a scarf in the German national colours scarf. Then through multiple passes between employees and with the help of a bit of cinema magic and perfectly synchronised frame cuts, the ball makes its way slowly but steadily from the Foreign Affairs Ministry, located next to Museum Island, to the French Embassy in front of Berlin’s Brandenburg Gate. Waiting there was H. E. Amb. Philippe Etienne, also dressed for the occasion, who receives the ball and scores.

The pretext for the video was the Euro semi-final between France and Germany, which we know now ended in a French victory. However this victory didn’t guarantee the French the title, which was surprisingly won by Portugal. Yet football is, in this case, just another way to show just how healthy the bilateral relations between two historically irreconcilable enemies are. Now it is only in sport that we see these nations face off against one another, instead of standing side by side.

The video also highlights multiple examples of French-German friendship, which can be found in the short 10-minute walk from the Ministry to the Embassy. The French-Friedrichstadt Church, the French Street or the famous Galleries Lafayette, all located in the Mitte Neighborhood of Berlin. It ends with a hug between employees from both countries, dressed in their respective national football kit. 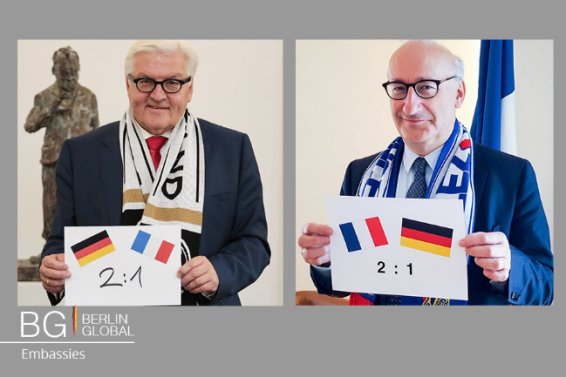 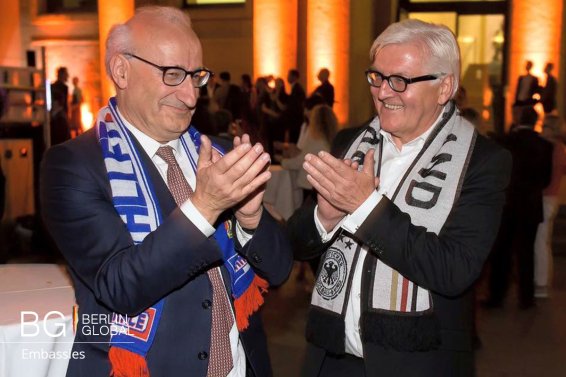