Culture Never Breaks Relations between Countries, instead it Strengthens Them

His Excellency Orlando Maniglia Ferreira, Ambassador of the Bolivarian Republic of Venezuela to Germany in Berlin, talks to Berlin Global

On 12th September 2016, a team from the ICD had the pleasure and privilege of interviewing His Excellency Orlando Maniglia Ferreira, Ambassador of the Bolivarian Republic of Venezuela to Germany. This interview gave us the opportunity to gain more knowledge about the relations between Germany and Venezuela, as well as the Embassy’s work to promote Venezuelan culture in Berlin and throughout Germany. Ambassador Maniglia Ferreira shared with us his vision of cultural diplomacy.​

The interview started with an introduction to the Ambassador’s career. His Excellency Orlando Maniglia Ferreira has been General Commander of the Navy of the Bolivarian Republic of Venezuela, Minister of Defence and a speaker, among other positions, before taking charge as Ambassador of the Republic of Venezuela to Germany in 2015.

The former Ambassador of Venezuela to Germany, Rodrigo Chavez, was concluding his placement after a long diplomatic career of nine years when Ambassador Maniglia Ferreira was called to replace him as the new Ambassador of Venezuela, after a 10 year career in the military. Like every soldier, he didn’t deny the mission, stating that every position he served taught him something. According to Ambassador Maniglia Ferreira, in his position as an Ambassador he has learned to deal with a world with many different languages such as: German, Italian, Portuguese, French, Russian, Chinese and Polish.

Europe gives people the opportunity to meet each other. It is easy to adapt, understand and comprehend new tasks. It can be difficult when you arrive in a place where people have never worked in an embassy before. However, when he took charge of the Embassy of Venezuela in Germany, everybody knew what the job of an embassy was. Therefore the change was not so traumatic, although it is always a challenge to start something new.

The Ambassador shared with us his vision about the importance of cultural diplomacy to communicate.

The Latin American countries are involved in a project called GruLac, a direct treaty which is possible through all ways of communication. Every time an Ambassador leaves their position, the Ambassadors reunite for dinners and events. The concept of integration is very clear.

“Multicultural exchange between countries is impressive, as media is the first source of information. The most important role of an embassy is to inform the people. It is extraordinary how networks are growing every day. Social media is a great instrument of communication, used by the young generation to perceive other cultures.”

To understand the cultural role of Venezuela in the world, it is necessary to look at its cultural background. “We have so much to say about the cultural development of Venezuela, which began as an indigenous society and lived through colonization. The cultural process has been through stages. Spain can understand Venezuelan culture the most in terms of religion, the formation of cities, and the formation of population, for all of these processes happened in Venezuela. Families in Venezuela have relations with Spanish families.”

“The culture comes from certain African traditions: indigenous traditions and regional traditions. We have regions in the same way Germany does, and the traditions are also very similar to those in Germany. The presence of Germany in Venezuela is very important.”

There is still space for improvement in education and other areas between Germany and Venezuela. “I am enthusiastic about increasing educational cooperation. We need to bring Venezuelan students to train in Germany, forming part of some student planning, and I certainly believe that the economic part can help a lot with that, with the granting of scholarships. I think that integration between German and Venezuelan companies could help develop bigger educational projects. I really believe that the dual education system here in Europe is excellent. It would be a good idea to bring this educational method to Venezuela: although we had it before, we would like to bring it back to our country.

I believe that it is important not only in terms of university education, but also in technical and professional formation. We have developed the area of audio-visual and telecommunication so much and for this reason, when it comes arts, movies and shows, there are a lot of things to exchange.”

“Other topics that are really interesting are the fields of minerals and the petroleum and plaster deposits, in which we could develop many models of development. What is interesting is that many Venezuelan students can come and learn here in Germany to become entrepreneurs and bring such experience to Venezuela and adapt it there. This may help cultural and sociological transformation and, above all, the most interesting thing is the additional value of education.”

What kind of events would you highlight as the most successful since you became the Ambassador of Venezuela to Germany?  What are the most relevant upcoming events in the embassy?

“I think the historical events and, above all, the ones that highlight the figures of Simon Bolivar, Francisco  Miranda… We actually just celebrated the 200th anniversary of Francisco Miranda’s death. All this cultural context has allowed the development of a set of panel discussions. On the other side, the political development of the new Venezuela, with our new constitution, gives us the chance to organize conferences and talks with great attendance, mainly by people from Germany.”

“Also, another function of the Embassy of Venezuela in Germany is to take the responsibility to explain the reality of the situation, based on the constitution and legal documents. Because the media explains the reality depending on its viewpoint. I am not designed to come here to tell lies to people. The truth includes our failures and also what is happening. There has been an effort by the Venezuelan Embassy in Berlin to do this through conferences held here and elsewhere.”

“The other day, the Venezuelan opposition called for gatherings in the different embassies against the policies of President Nicolas Maduro. We did not have any kind of concentration here at the Embassy of Venezuela in Berlin: there was something in Hamburg, but nothing in Frankfurt either. We can interpret this as the population certainly understanding what is happening in Venezuela, and we must let Venezuela solve its problems internally.”

“The objective of the embassy is to inform everyone so they can make their decision. The government has designed 15 engines, which are 15 projects. They are projects from the mining, oil and agriculture sectors. These 15 projects could make a deal with other countries. In almost all the countries, we have many possibilities to make agreements with companies. Imagine that we do the same in the cultural field, in the educational area. It is very important, especially for cultural, political and social issues. I cannot tell you that we are perfect, but we can tell the truth, which is necessary.”

Venezuela, among other Latin American countries, is aiming for greater self-management of its resources, such as the famous nationalization of hydrocarbons implemented by Hugo Chávez. In this sense, we can understand that Venezuela is a country that advocates the conservation and self-management not only of its economy and resources, but also of its cultural heritage and traditions, thus protecting the preservation of its identity as a country. Could you specify what measures the Venezuelan government is taking in this regard?

“You have touched on the subject of our natural resources. On one occasion, a great politician and writer, illustrious of our country, who is sadly deceased, Arthur Lapierre, said: "we must sow the oil". Sowing oil is to take advantage of the resources to generate opportunities in a country. Unfortunately, the oil exploitation in Venezuela at the beginning relied on the United States, which became the promulgator of the development of the oil industry. Of course, in the commercial world there are businesses, that is clear. Over time, Venezuela was acquiring knowledge, learning about development, and the citizens got more benefits and advantages in the oil field than in agriculture and livestock.

Then there was an abandonment of work in agriculture and livestock. So this phrase of "we must sow oil" refers to how we should recover our livestock, agriculture… Sow culture, sow education, sow the economy. We have lived with a high oil cost in Venezuela, and we are called a "rich" country. But sometimes you can be a "rich" country, but with many difficulties.”

“When Hugo Chavez came to power, with the promulgation of a great national understanding that gave rise to the Bolivarian Constitution of Venezuela, the ideal circumstances occurred to develop a model of integration in the rest of Latin America and the Caribbean. At that time, Venezuela was not selfish with the oil, but used it to make viable business for countries that at that time did not have the facilities to acquire it. Then there was a business with considerable prices, not an international price but rather a more "comfortable" price, with facilities to pay… Among them was Cuba, for example. Venezuela has been criticized externally and internally a lot, but that was a policy that made it possible to model integration. The Latin American international flag remains a sign of integration.”

“The model of integration is linked to culture, and here I am going to answer your question, because when you try to develop one integration model among countries, the integration is not to do with money and oil, it is also in the field of cultural exchange, knowledge and skills. We had growth in the region, but unfortunately when the price of oil came down, the economy of the region came down at the same time. But, for example, here we have the example of Bolivia, which is rising very strongly with natural gas.

The exploitation of gas, oil and hydrocarbons, as well as the exploitation of new oil fields, allows the use of these resources by other regions through what is known as integration model. The model of integration was not selfish, but was designed to share it. For our part, we have to apply the phrase of "we must sow the oil".”

As you know, former Spanish President Jose Luis Rodríguez Zapatero is the President of our institution. It is currently developing a mediation effort to reach a dialogue between the government and the Venezuelan opposition in order to establish a peace situation. What are the fruits of this work both politically and culturally?

“I met former President Zapatero when I was Minister of Defence in 2005. He was a young, enthusiastic person who is doing an interesting job with Venezuela to seek cooperation and exchange. Zapatero and Hugo Chavez were very friendly to each other. So the work that Zapatero is doing is good for the dialogue and it is helping the Venezuelan people. I believe that the effort made by Former President Zapatero is admirable.

I think that Zapatero's participation in the famous 9th September march helped to develop everything within the peaceful framework and it is helpful for good understanding. I think Zapatero has been a Ronaldo or a Messi playing with us on the court, he is doing very well.”

“I am sure nothing bad will happen. I am sure there will be understanding. Because throughout this period we have set an example to the world of civic relationship and understanding.”

Thank you so much Your Excellency for your time.

“Many thanks to you.” 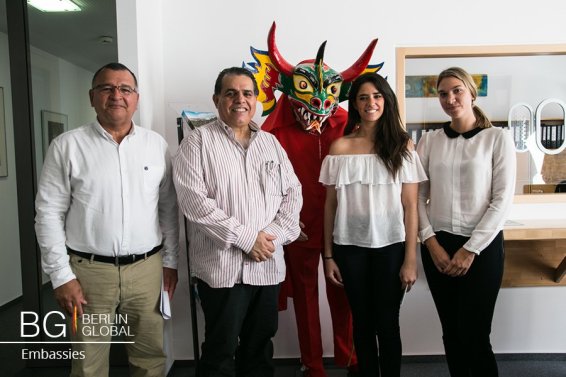 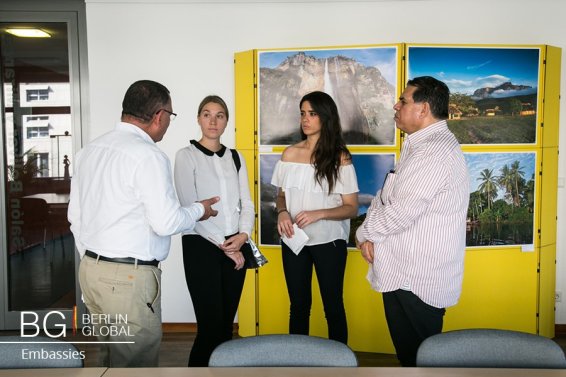