Culture Dialogue Can be Effective by Action Rather Than Words

Her Excellency Nongnuth Phetcharatana, Ambassador of Thailand in Berlin, talks to Berlin Global

The ICD team had the opportunity to speak with H. E. Nongnuth Phetcharatana, Ambassador of Thailand in Berlin. We learned more about the Ambassadors personal career, her views on relations between Thailand and Germany and her take on cultural diplomacy.

Well, when you ask about what is my most challenging position, I would say working as an ambassador of Thailand to European countries. Thailand is far away from Europe, and we are not a powerful country, just medium sized country. So working in Europe sometimes is not easy, particularly when we want to attract more business and investment from abroad. Tourism is not difficult to promote because Thailand is one of the world’s most popular destinations. We want to inform the German people of Thailand’s economic and business potentials. Therefore, we have to work hard to promote economic and business exchanges between Thailand and Germany, as well as between Southeast Asia and Europe. In particular, Southeast Asia is becoming a single economic community. European business coming to Asia always focuses on China, Japan, and Korea. We need a lot of effort to convince German business that their business presence in ASEAN will be mutually beneficial.

Another challenging task for me as an ambassador is promoting the mutual understanding between our two countries. Mutual understanding is not confined solely to culture but also to different ways of life, values, priorities/limitations and special circumstances for the country. As an ambassador, we have different levels to work with, i.e. government level, business level, people to people level, media, etc. Their views and opinions can affect the atmosphere of our bilateral relations.

You have been the Ambassador of Thailand to Germany here in Berlin since 2012. How have you enjoyed the position so far and what has been the main focus of your work since you started?

I have been here for four years and two months. I’m going to complete my term very soon. I learned a lot during my stay here; Germany is a model for Thailand in many things: the German technology, well-structured society, and how the country re-built, in business and economy. There are a lot of things to learn for developing countries like Thailand. Thailand and Germany have had diplomatic relations for 154 years. The main focus of my work is how to move this relationship forward, how to make our relationship stronger and meaningful. We have to find common ground and bring more dynamism to our bilateral relations.

In the past few years, the area of cooperation which we actively promote is vocational education. This is an area that Thailand need a lot of improvement. This is the area of “win-win” for both sides. German business has strong interests to improve vocational education in Thailand. We would like to welcome more German engagement and partnerships in various vocational schools and colleges in Thailand. The other area is the renewable energy, green policy and energy efficiency. We have active cooperation with Germany in sharing knowledge and exchanges of experts. We can learn from Germany’s good practice in these areas.

Well, it was mainly by my academic background. I studied political science and international relations.  Also my personal interests in international affairs led me to this career. My parents also guided me to be a civil servant.

How have relations between Germany and Thailand changed over the years and in what ways is the Embassy of Thailand in Berlin promoting Thai culture?

There is a strong foundation in the bilateral relations between our two countries. No matter how circumstances change, we can still maintain a good level
of cooperation in various areas. The relationship has been deepened and broadened over the years covering business and investment, green technology, high level and vocational education, science and technology.

As for the people-to-people relations, Thailand and Germany are strongly connected through tourism. However, I believe that we can do more to promote better understanding of Thailand and Thai people through cultural activities. In the past few years, the Embassy has focused more on bringing the modern culture of Thailand to Germany. Especially for the new generation, we have a lot of talented young people in modern music. The role model is His Majesty the King, who composed jazz music. The King composed more than 30 songs in jazz, which is very beautiful music. There have been numerous modern Thai music performances in several cities in Germany including Berlin. It is a great pride to see that these performances are very well received by the German people. Overall, this is the way to bridge our different cultures through music, as we call it “the east meets the west”.

How would you define Cultural Diplomacy, and what does it mean to you? How can we use cultural diplomacy to strengthen the relations between Thailand and Germany?

Can you give us an example of a time in which you were involved in successful cultural dialogue? How do you see the role of Cultural Diplomacy today?

We bring various cultural activities to the society here, both traditional and modern, to show that Thailand has rich and diversified cultures. The successful performances in Germany by Thai orchestras and symphonic band have demonstrated talents of young Thai musicians, conductors and composers. Some of their music also tells stories in Thai history and way of life.

Culture dialogue can be effective by action rather than words. I initiated projects which the Embassy invited German students to visit Thailand with particular focus on rural and agricultural areas. The Embassy also provided financial support for the exchange of professors at some universities in Germany which have Thai studies program. We also donate Thai books, CDs, Films, all mediums which are used to help Germans understand Thai society.

First, it’s not only about your background of study, it’s a matter of your strong interest in the career and you like the job. As the world moves faster and faster nowadays, the diplomats can never stop learning and updating themselves. Family matters and health issues can be decisive factors in pursuing this career as diplomats frequently travel in long distances and work for years long away from home. We have had both challenges and opportunities. And it can be very rewarding for those who enjoy this career. 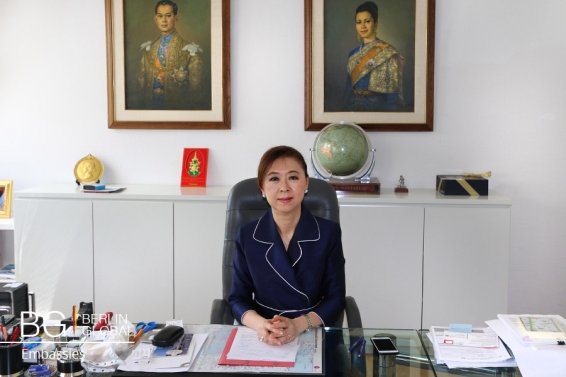 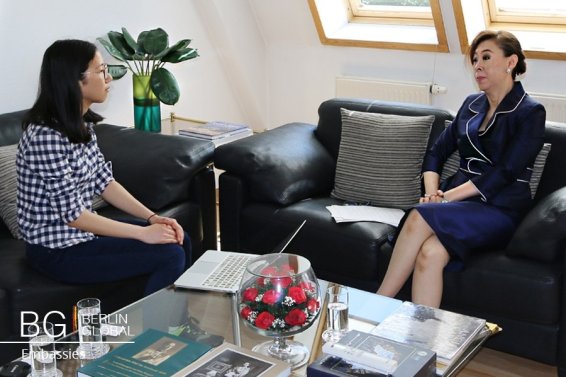