A Farewell Party at the Bulgarian Embassy in Berlin

The evening, organized by the Former Ambassador of Bulgaria to Germany , H.E Radi Naidenov featured a lot of high profile figures committed to the promising bilateral relationship between Germany and Bulgaria.

The evening started at 7 PM with a warm welcoming speech from H.E Radi Naidenov. Mr. Radi Naidenov is a Bulgarian politician and diplomat. As a former Minister of Defense and Foreign Minister he is one of the most important figures of Bulgarian foreign politics. The evening was organized because of his departure from the post of ambassador in Berlin.

During the speech the ambassador gave an outline of the history of the relationship between Germany and Bulgaria. In the speech he emphasized the role of Bulgaria, as a part of the European family which was not surprising since H.E Radi Naidenov is known for his strong pro-European views and actions.

After the speech the jazz music evening started with a prominent jazz musician from Bulgaria. Wine and food was also offered.

The culmination of the evening was the music played in piano from the twin brothers who were part of a Eurovision team before.

The evening ended with another short speech of the Ambassador thanking everyone for their presence at the evening.

The new Bulgarian Ambassador is expected to continue the work of H.E Radi Naidenov in January of 2019. 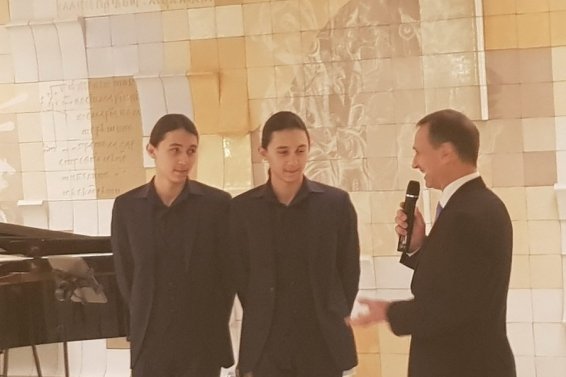